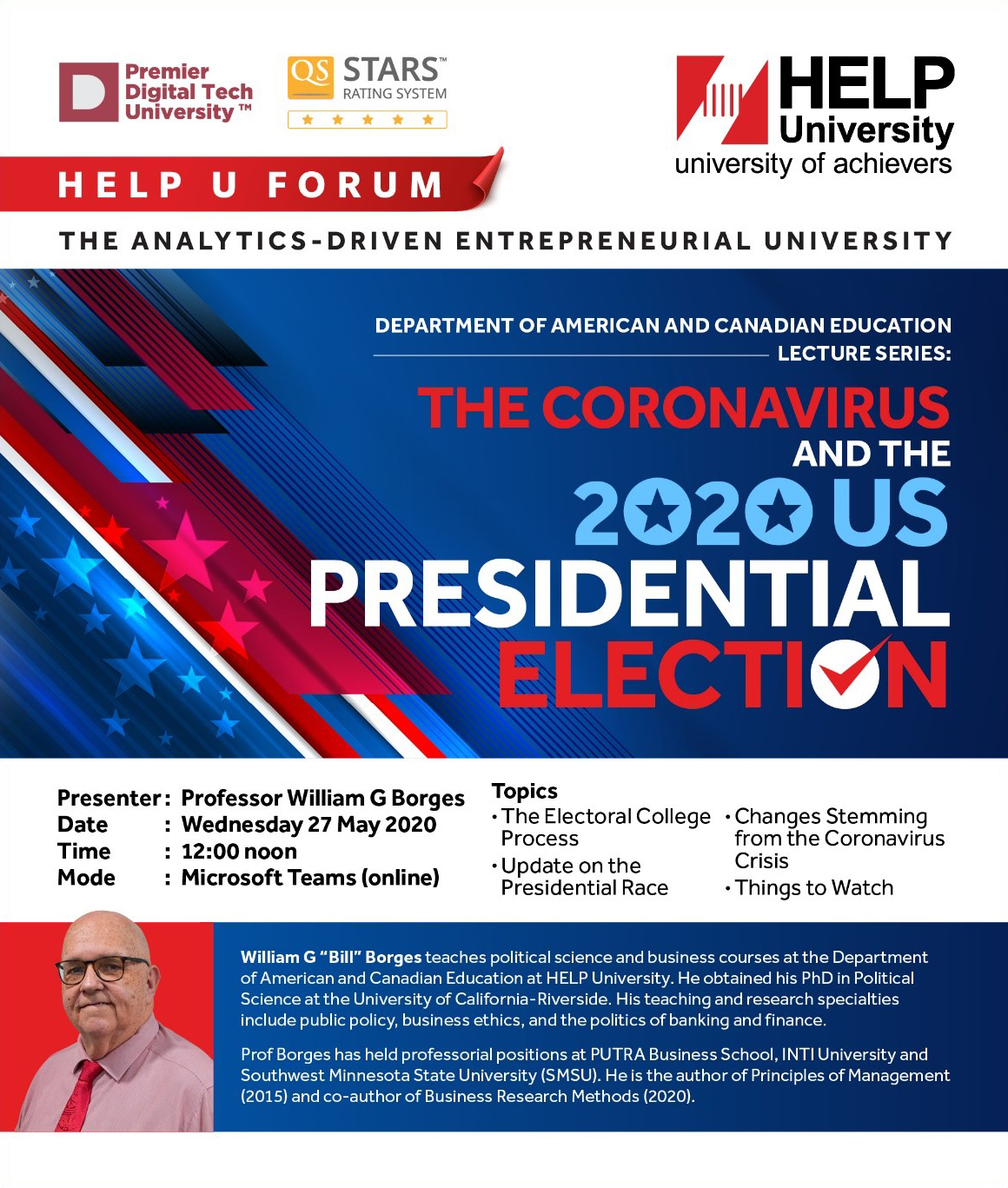 THE CORONAVIRUS AND THE 2020 US PRESIDENTIAL ELECTION: A DEPARTMENT OF AMERICAN AND CANADIAN EDUCATION ONLINE LECTURE SERIES
July 2020
By Lim Vin Tsen

HELP University’s Department of American and Canadian Education recently hosted a webinar, “The Coronavirus and the 2020 US Presidential Election”. The webinar was presented by Professor William G. Borges, a Political Science and Business lecturer in the ACE Department. Professor Borges talked about the implications of the global pandemic on the upcoming 2020 USA elections.
In early March, health experts in America warned that the United Sates ran the risk of running short of vital medical supplies, such as masks and ventilators, to combat the growing Covid-19 pandemic. Donald Trump resisted calls to invoke the Defense Production Act, a 1950 law that gives the President broad powers to prioritize the production of items deemed important for national security. Finally, President Trump had to drop the pretense and invoke the act to order the supplies of ventilator manufacturers to give them the components they need to speed up production.

Every day, in ways small and large, the spread of the coronavirus is reshaping American politics. As the death toll rises and the economic fallout spreads, measures once considered unthinkable are being adopted, and not just in the public-health sphere. The $2.2 trillion emergency spending bill that the US Congress passed is worth about ten per cent of G.D.P.*and in the coming months, there will likely be another stimulus. This dramatic increase in federal spending is comparable to what happened in 1942, the year after Pearl Harbor, when federal spending rose by more than ten percent.
*Gross Domestic Product (GDP) is the monetary value of all finished goods and services produced within a country during a specific period. GDP provides an economic snapshot of a country, used to estimate the size of an economy and its growth rate.

History shows that lethal pandemics and major wars can both have enormous political and economic consequences. Described as two of the “four Horsemen”, both have been historically documented to flatten economic inequality throughout human history. By decimating the population of medieval Europe, the Black Death made labour scarce, which raised wages and undermined the feudal system. The Civil War abolished slavery and gave rise to the Homestead Act of 1862. The First World War changed the role of women in the economy and paved the way for their political emancipation. The Second World War elevated the role of labour unions and led to the explicit adoption of Keynesian full-employment policies, through the 1946 Employment Act. In Europe, it facilitated the creation of a post-war welfare state, including the National Health Service in Britain.

Today, the “wartime” metaphor is in many ways apt. Daily life has been transformed with almost ten million Americans filing for unemployment claims and, as in wartime, people are frightened, public attitudes are changing, and the circumstances are necessitating a big expansion of the government’s role.

At present, the recent explosion in new Coronavirus cases has reached three million, prompting questions on whether this will have an adverse effect on the upcoming 2020 US Election. Professor Borges said, “As to the presidential election, I do think the crisis will have some definite, even quantifiable, effects. Normally, national crises are helpful to a leader’s popularity (whether those be wars, depressions, or public health crises). What happens in almost all cases is that the public immediately looks to their leader for help, encouragement, and words of comfort, and the leader responds quickly and thoughtfully and does things to help. This in turn is helpful to the leader (a governor or mayor or president).”

“When 911 occurred, ‘ said Professor Borges, “President Bush reacted in a positive way, adopted a healing tone and message, and his approval rating sky-rocketed, jumping forty percentage points, to around 90 percent. The same thing happened with President Kennedy when he faced the two most significant crises of his presidency, the Bay of Pigs disaster (which he handled very badly) and the Cuban Missile Crisis (which he handled very well). Both times his approval zoomed, topping 80%. What Kennedy’s experience tells us is that even when a leader does poorly in a crisis situation, as long as he is perceived as trying to do the right thing in the national interest, the public will support him.”

However, Professor Borges pointed out that President Trump’s response to the pandemic has been anything but uplifting or helpful. “His initial denial and then downplaying of the coronavirus, his slowness in taking steps to fight the spread of it, his challenges to doctors and scientists regarding the virus itself, his random and rather foolish suggestions about the effectiveness of unproven drugs and the possibility of injecting disinfectants to fight the virus, and his general attitude about the crisis, which has divided rather than united people, have, and I believe will, continue to hurt his approval and his chances to win re-election, which already were not very good.”

This, coupled with the general public opinion on how Trump and his committee have handled the pandemic, has ows that he has done tremendous damage to his already already-weakened ‘brand’ with his behavior and public utterances since the virus hit. Truth be told, it is Trump’s lack of empathy, racial insensitivities and blatant public health ignorance that have resulted in the president digging himself a deeper hole when it comes to the election. The opinion polls since the virus appeared have shown this, and those polls have worsened, for Trump, in recent days.

Though it is still possible that Trump could eke out a very close victory in the upcoming election, the reality is that he has virtually no chance of winning the popular vote (he lost it by nearly 3 million votes in 2016, where a fluke gave him a win in the electoral college). Professor Borges noted that, “(Trump) also has, in my view and the view of many political analysts, only an outside chance of winning enough electoral votes this year. While he is behind, in the average of reputable polls, by about 9 or 10 percentage points nationally, he is also behind in the six ‘swing states’ (all of which he won in 2016) by substantial margins except in North Carolina. “

He has practically no chance of winning any ‘Clinton States’ this time, and his team knows that. So he must hold onto these swing states, where plenty of people have simply soured on him—not necessarily because they are wild about his presumptive opponent, Joe Biden, but because they look at his tenure in office, including his public behavior with sadness, disappointment, or even disgust. The pandemic is a wake-up call to Americans, as it is to people all around the world. Only time can tell if it will affect their long-term behavior once the pandemic crisis is over. There is a possibility that once the crisis ends, people will return to a ‘live and let live, anything goes’ mentality. We will just have to wait and see.

Students complete two years at HELP, and then transfer internationally to complete degrees in business, engineering, computer science, psychology, communication and other fields of study. ACE emphasizes holistic development of young people, and the betterment of communities through education and outreach.
For more information on ACE, please visit www. university.help.edu.my