Annually, the Law Department of HELP University organises its signature event, the Law Olympiad competition for various secondary private and public schools. The competition has been running since 2000 with each year bringing new faces and talents. Eager students and teachers turned up as early as 8 am to register their participation at Wisma HELP on the Saturday morning.

The Law Olympiad competition is aimed to encourage analytical and critical thinking skills in students who may develop an interest in the study of law. The criteria used in adjudicating the competition are based purely on logic, common sense and reasonableness, and not knowledge of the law. Four games or quizzes were challenged in separate sessions with each group or team consisting of 5 members. The first challenge was called “Socrates, The Greatest Thinker of All Times”, next was “Sherlock, the Super Sleuth” followed by “Da Vinci, The Renaissance Man”, and the last challenge was named “Justice Pao, The Fountain of Justice”. After each session, marks were projected for the teams to know their standing.

According to Ms. Vasantha Punniamoorthy, Dean of the Faculty of Law and Government, the purpose of the Law Olympiad is to inculcate the interest in law, to emphasise that it is an exciting field, and the games were made fun and exciting. The students had to play judge or advocate in the activities. For example, in Socrates, The Greatest Thinker of all Times activity, the participants were required to complete the provided diagrams by presenting arguments in the form of reasons and objections to a particular claim. In Sherlock, The Super Sleuth activity, the team members had to identify the criminal by studying the various pieces of evidence. The participants were also tested on their general knowledge and current affairs in the Da Vinci, The Renaissance Man activity, and finally, in Justice Bao, The Fountain of Justice, the teams had to guess the possible verdict the judge would arrive at. All the activities required the teams to give reasons for their decisions. 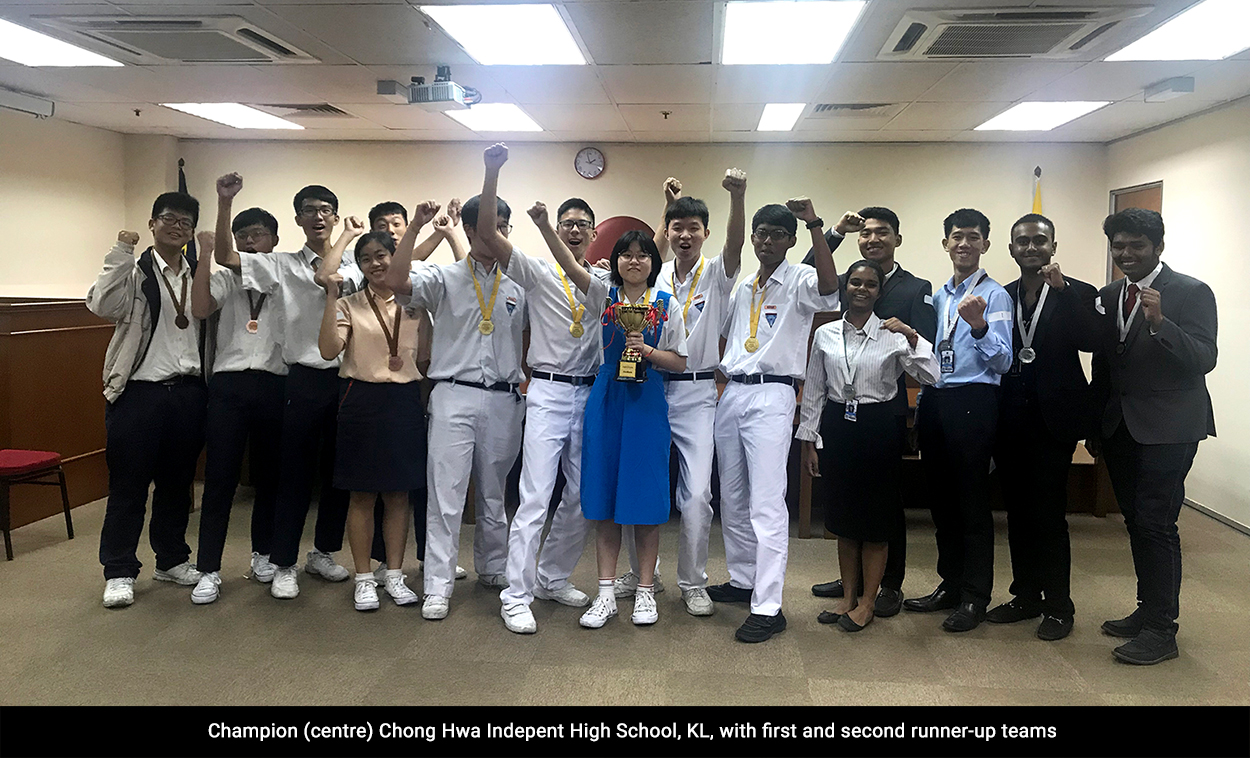 At midway of the competition, two judges namely Ms. Vilmah Balakrishnan, a senior lecturer, and Ms. Khadijah Al-Samarraie, a lecturer, said that so far, most of the participants had done well, were competitive and high-spirited. Ms. Vilmah said there were some answers that were brilliant. Ms. Khadijah had the same opinion and was impressed by the answers that were beyond expectation. The judges were confident that the games had met their objectives, and it was apparent to see how the participants think through their answers. Dr. Jaspal Kaur, also a senior lecturer, was happy to see that all the participants were focused on the issues at hand, looking at evidences in front of their eyes and trying to analyse before coming to decisions. Participants adhered to the no phone rule which also showed that they were engrossed in the activities.

One teacher from Chung Hua High School Seremban, Mr. Eric Kong said he had hoped that by the end of the games, participants got the exposure to law. He also said that it is good to encourage students to understand as our society must deal with laws from time to time. Tharseega Sharon a/p Anthony, a student from Kolej Tingkatan 6 Desa Mahkota expressed that the competition was something new, and she had never attended something like it. She learned a lot of skills like using her cognitive skills, building teamwork, intellectual thinking, assessing a situation using logic and judging someone based on evidence. She thought that the games were well-planned, well-assessed, and will definitely think about taking up law as a degree. Her interest in law grew from her father first as he is a lawyer, and she also likes to speak, meet people, go out to investigate, and learn new things. Another student, Bosco Lee Kar Jung from Kwang Hua Private High School said he came for this competition because it was recommended by his teacher. However, after looking at the agenda and activities, he felt that the games might be interesting and entertaining, so he gave it a shot. He did not regret his decision although law is probably not something he would pursue. The games have taught him some general knowledge, ways to find answers, and how law is functioned. Initially, to his understanding, law is just about sentencing someone to death. The activities and exposure have clearly given him a change of perception. 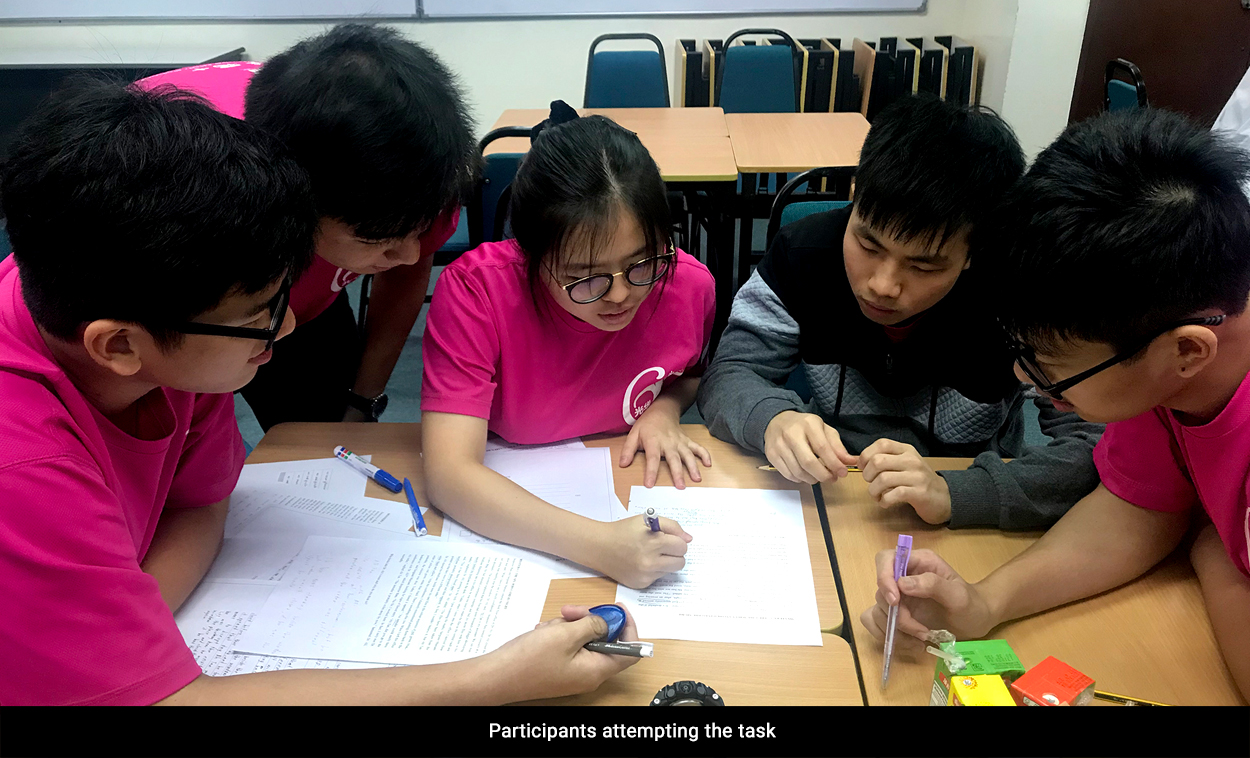 The activities did not stop at the games. After lunch, the participants were presented a mock trial by the Faculty’s July 2019 intake students. There, the participants witnessed how a court ran in a session. The case was about a boy who was accused as a bully at school. At the end, the participants of the competition acted as jury. They had to decide whether the accused was guilty or not using their understanding of the court case.

It was finally reaching the peak of the event. Results were announced to the participants. Chong Hwa Independent High School, KL emerged as the champion! They said that they had no strategy in tackling the challenges, but mainly focused on teamwork effort. Although they were leading after the first round of marks were revealed, they still felt surprised to win the overall competition. This was because while doing the activities, one of the obstacles they faced was uncertainty of the answers. The first runner-up was Kolej Tingkatan 6 Desa Mahkota. The diverse skills, synergy and team spirit brought the team to the second place. Finally, the second runner-up went to Chung Hua High School Seremban. The team was really surprised to have won a place as most of the team members were not very experienced in competitions. However, they believed that the team members who are good in maths helped them to analyse problems carefully, and that made them think for good answers. 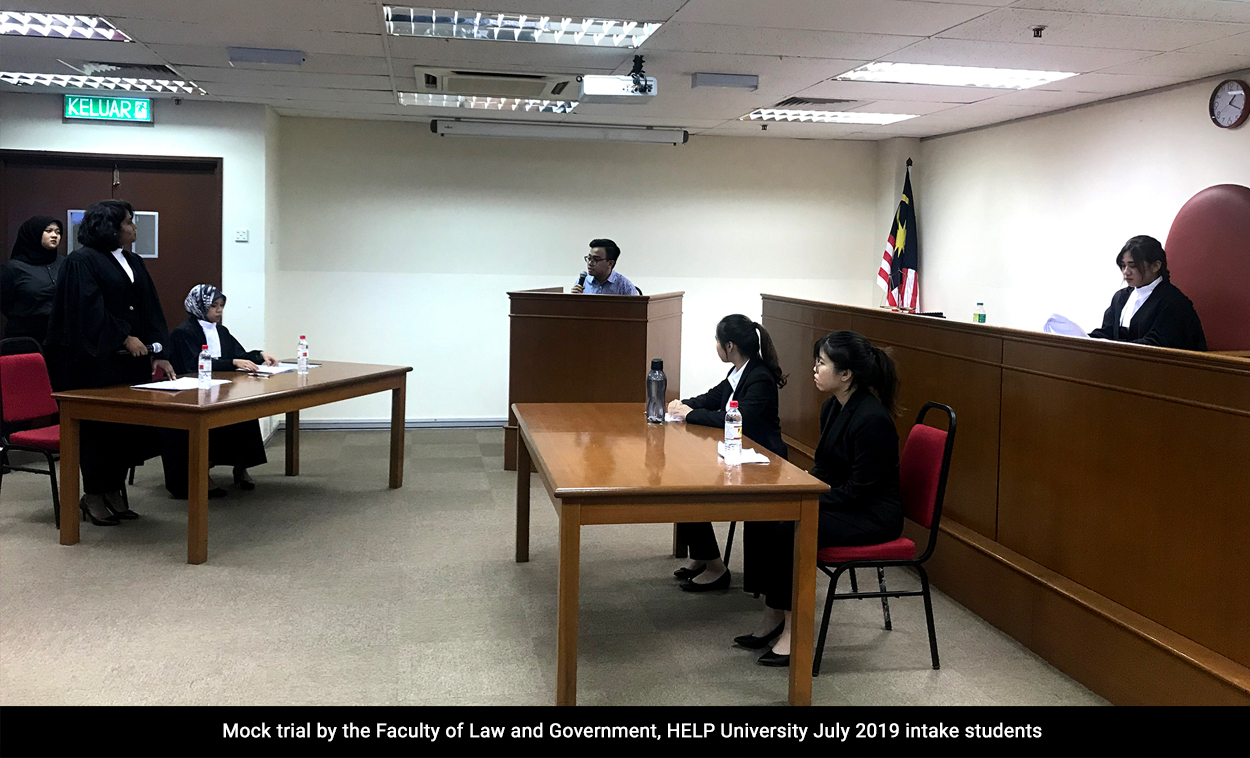 In the past, there have been instances where participants from the Law Olympiad competition came back to join the law programme at HELP University. One example is a student named Lua Bo Feng who read law on the 2+1 and later joined the Faculty as a lecturer. He currently teaches as a Visiting Fellow. Ms. Vasantha said, “If there is anyone who is interested in Law, come and speak to us. The mindset of Malaysians is that if you do law, you must practise law. This is not necessarily so. Doing law opens the opportunities in many other industries such as oil and gas, human resource, banking, and corporate. Doing a business does not necessarily mean you need a business degree. You can start with law as you gain other skills like reading contracts, analysing cases, thinking rationally and many more. A law degree coupled with a Master’s in Business Administration or Human Resource Management or Economic Crime Management places the graduates in better stead.”

Data and privacy and also misinformation is now a trend in law due to the digital world as they are easily available on the internet. People have to see what is true when disseminating information. Ethics must now come into play said Ms. Vilmah. “Accessibility of law or knowledge of law is different than the past. For example, if one needs to know a federal constitution, he or she will have to open a book or a document in the past, but now it is just a click of a button,” said Ms. Khadijah. She continued by saying that students are more open to law today because it covers a wider spectrum such as theft. Now, there are thefts in different forms – physical and digital. Indirectly, it becomes more interesting because law also affects us more than it used to.